The Lion King Fanon Wiki
Register
Don't have an account?
Sign In
Advertisement
in: Males, Lions, Characters,
and 6 more

"They aren't alone anymore. We're going to protect them. Protect them forever, no matter what happens."
―Kingiza, Strength of Heart

Kingiza is an adolescent male lion and a member of the Moyo Hodari Pride.

Though short, Kingiza is sturdily built and firmly muscled. His features are round, though living without much food has given new edges to his naturally smooth attributes. His coat is fulvous, though in very bright light it can seem fully orange. His underbelly and muzzle are the color of sand, notably lighter than his main fur color. His aeneous eyes are set just slightly closer together than average, and his paws are broad and large enough for an adult lion. His long, rust-colored mane is smoothed backwards, though a part of it curls upward and refuses to be flattened. His teeth are white and unstained due to his youth. He has a dull apricot nose, and his tail tuft is the same color as his mane.

Kingiza is curious and bold. He is never afraid to explore a new place, no matter the dangers it may bring. He can be overly confident at times, and will jump in situations before understanding what he is getting himself into. He won't hesitate to challenge others, but never without reason. He can be defensive and is seen as touchy by some due to his short temper. He has a tendency to disrespect others if they are even the slightest bit rude to him, a habit that he is attempting to break without much success. He can be snappy and snarky at times, but he tries not to employ sarcasm when it would only be unhelpful. He is reserved upon meeting other animals for the first time, but warms up quickly and can be very friendly when he is in a good mood. Though he may not display it often, he has a very compassionate heart and will loyally defend those he believes deserve protection. 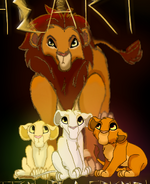 Nurisha, Ajali, and Macheo sitting at the paws of Kingiza on the current cover of Strength of Heart

Community content is available under CC-BY-SA unless otherwise noted.
Advertisement